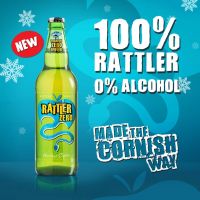 Rattler Zero, which is also gluten-free and vegan friendly is available in single 500ml bottles and in cases of 12 x 500ml, direct from Healeys Cornish Cyder Farm and online.

Described as “100% Rattler, 0% Alcohol”, Rattler Zero has been almost three years in the making, recognising that no or low alcohol does not mean a compromise on taste.

“It’s very easy to get this wrong. When choosing Zero alcohol, consumers don’t want an existing product that’s simply diluted down, they want a real product in its own right, and they shouldn’t need to compromise on taste or mouthfeel. We believe we’ve developed a unique method here in Cornwall which means 97% of this product comes from fermented apples, giving the character and flavour you’d expect in a Zero alcohol Rattler product. 100% Rattler, 0% alcohol.”

The launch of Rattler Zero marks Healeys’ entry into the low & no alcohol category and adds to the existing award-winning Rattler brand of ciders and spirits, which now boasts ABV levels ranging from 0% to 37.5%

It’s no secret that Rattler is recognised as Cornwall’s ‘go-to cider’ and you won’t have to look far to find photos across social media depicting a pint of Rattler by the sea, as locals and guests alike get together with friends & family. The arrival of Rattler Zero goes one step further to improve consumer choice and of course, nobody should feel left out!

Rattler remains one of the fastest-growing independent cider brands in Cornwall with its 500ml Rattler Original 6% available nationally with Tesco, ASDA, Morrisons, Tesco and Sainsbury’s.

Buy Rattler Zero online or at the farm. Visit Healeys Cornish Cyder Farm this winter and automatically save 60% off admission.

When you book your visit online to see us between now and the end of January 2022, admission costs have been reduced by a whopping 60%, which means an adult admission ticket is just £4 and children aged 0-4 go free!

Plus, every admission ticket will be upgraded to a Healeys Membership, giving you free unlimited return visits to the farm for 12 months. Pay for a day, visit for a whole year.