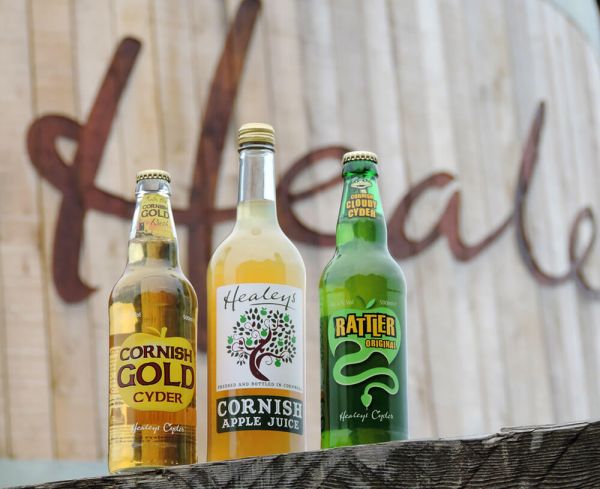 Healeys Cornish Cyder Farm is celebrating after three of its products won accolades at a national awards ceremony.

Cornish Gold cyder, Rattler original and Cornish Apple Juice were the toast of the British Bottlers Institute (BBI) annual dinner awards which aims to showcase excellence across the drinks industry.

Healeys Cornish Apple Juice was given particular praise, scooping gold in the fruit juice category for the second year in a row.

The business and visitor attraction near Truro competed against a record number of entrants in this year’s BBI competition, which was founded in 1953 to recognise good quality bottling and packaging of tipples including ale, lager and cider as well as water and soft drinks.

Joe Healey, Commercial Director at Healeys Cornish Cyder Farm, said: “We are delighted to have won three awards at the prestigious BBI awards for some of our great products. We are particularly pleased to have been praised for our packaging and bottles as we have invested in a new state of the art bottling plant onsite this year.

“Winning gold for our Cornish Apple Juice two years running highlights our consistency to deliver great tasting products which are made right here in the heart of Cornwall.”

Healeys was awarded a diploma for its Cornish Gold in the ciders abv 4%-5.4%, the silver award for Rattler Original in ciders abv 5.5% and gold for the second year in a row for its Cornish Apple Juice in the fruit juices category.

The winners were presented with their medals and certificates at the annual BBI awards dinner held on Friday 22nd October at the Vintners’ Hall, London.