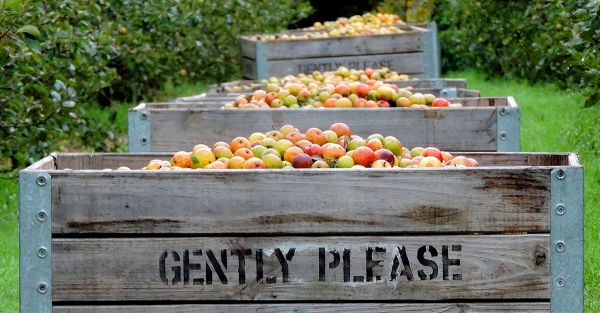 Healeys Cyder Farm are pressing even more apples this autumn after increasing its production capacity by 50 per cent.

Strong sales of established brands like Rattler and Cornish Gold have helped send production at Healeys Cornish Cyder Farm into overdrive, and it’s set to be a busy few months for the team at the cider makers and visitor attraction near Truro.

Apples are carefully pressed so they can be transformed into thousands of bottles of cider and hand-crafted fruit juices, which are sold nationwide.

Joe Healey, Commercial Director at Healeys Cornish Cyder Farm, said: “We have a very short window to harvest and press the apples, so it becomes a 24 hour operation to make sure we gather as much juice as we can from the fruit. Last year we pressed 950 tonnes of apples, but this year we are already expecting to press more than 1,500. These apples will be used to produce our award-winning range of ciders and fruit juices on sale for the coming year so it is very important to process as much as possible while the time is right.”

This year’s harvesting began in September with the pressing machines whirring to life for the short season. Around 28 tonnes of apples can be processed every day at the family owned and run farm, with up to three tonnes pressed every hour during the harvest.

It takes around two days to press enough juice to fill a 50,000 litre tank at Healeys. When a tank is full, yeast and nutrients are added to boost fermentation before a team of master cider makers transform the matured alcohol into the award-winning Healeys range of drinks.

Joe added: “I love harvest and pressing time here at Healeys. The sweet smell of apples fills the farm and it is a great time of the year for people to visit us, as they can see for themselves how our cider and juices are created, and follow the journey from the apples being picked in our orchard, to cider being bottled and sold in our shop. It’s a perfect way to share our passion for creating the best products we can. ”

Healeys runs regular tours of its bottling plant and orchard, as well as operating a recently expanded visitor centre where you can learn more about how some of the county’s tastiest drinks are made – and sample some for yourself at the same time.

Healeys also produces wines, spirits and preserves, and recently signed a deal with major retailer Marks & Spencer to create a new cloudy Cornish Farmhouse Cyder to be sold in 468 of its stores around the UK.

The deal followed the unveiling of Healeys new £3.5million state of the art production facility, which can run 6,000 500ml bottles an hour.