Published 25th May, 2017 by Healeys Cyder Farm in General 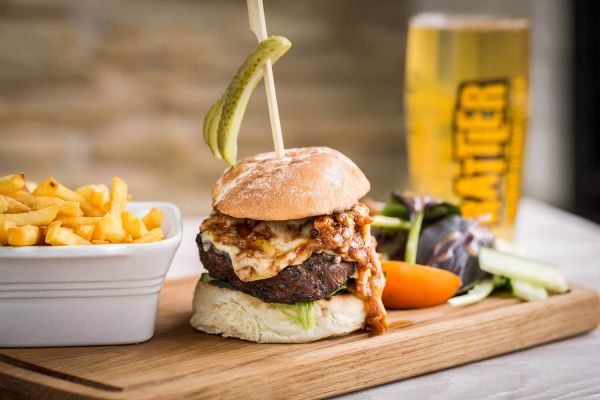 When you first set foot on the cobbled stones of Healeys Cornish Cyder Farm, you are hit with the sweet and zesty smell of countless apples as they make their way from unassuming fruits to delicious bottles of award winning cyder and juice.

Wandering through the working farm, not forgetting to say hello to the resident peacocks as they waddle past to find a warm spot to relax in, you begin to take in a wealth of scents from the nearby jam-making room.

And then you come across the delicious-smells from the farm’s newly opened restaurant. The Old Bottlery has transformed the site where the Healeys family used to preserve their cyder and juices. Now it is home to a modern, new restaurant that takes inspiration from the range of homegrown creations harvested at the popular visitor attraction.

From sweet and sharp orchard apples to pork from Healeys pigs, a mouth-watering menu is on offer at The Old Bottlery, using the finest and freshest ingredients. Rattler cyder, Cornish Scrumpy and a pantry of homemade jams and chutneys are all served up with light bites, lunch, and afternoon teas.

Joe Healey, Commercial Director at Healeys Cornish Cyder Farm, said: “We are so excited about being able to showcase all of the delicious and fresh ingredients we produce here on the farm to food lovers in our new restaurant.

“The bottlery has been an important part of life here for many years and we thought this was the perfect way to reinvigorate the space, highlight all the treats we have on offer and boost our visitor experience even more.”

The Old Bottlery was at the heart of cyder production at Healeys. Through increased demand and due to the continued success of famous brands such as Rattler and Cornish Gold, a larger, state-of-the-art production facility was required.

Deciding to breathe new life into the building, the Healeys transformed the bottlery into a modern restaurant, which is bright and airy with plenty of room to accommodate the thousands of people that visit the popular tourist attraction, near Truro, each year.

And with another nod to the apple-growing skills that have made Healeys an award winning household name, a giant cyder barrel has been upcycled and built into the restaurant worktop, alongside an eye-catching central woodburner.

“We wanted to make this a venue for food lovers while paying homage to the building’s bottling history,” Joe added. “Now it has been transformed into a new restaurant, offering everything from Rattler-flavoured sausages made with pork from our own pigs, to the fruitful jams that have helped to make our cream teas renowned with visitors.”

Dan Hughes, head chef at the Old Bottlery, said: “I am so lucky to be able to harness so many fresh and locally produced ingredients.

“Rattler is one of the best things to cook with; it complements pork so well thanks to its sweetness and crispness. And when you warm it up and cook with it, the fragrance it produces is incredible. It is so inspirational for me as a chef to have such an incredible larder of food right next to my kitchen.

“The fact that we have so many delicious ingredients right on our doorstep is fantastic.”

Extolling the mantra of food footsteps instead of food miles, Healeys cultivates its delicious produce on the farm, letting each ingredient speak for itself. And it is that simplicity and passion for promoting tasty food and drink that has helped the Healeys family to become a household name.

The farm, which was established on the site near Truro by Kay and David Healey in 1986, has grown to become the largest cider-maker in Cornwall, producing award-winning drinks including Rattler and Cornish Gold. It has also become a destination for whiskey-lovers, producing England’s oldest whiskey and launching Cornwall’s first distillery in over 300 years.

Healeys is open seven days a week throughout the year with food now being served at The Old Bottlery from 9am to 6pm and 9am to 8pm during July and August.