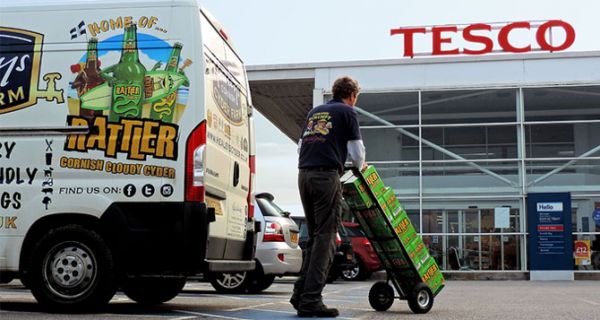 The family-run business has launched a new bite-size version of its award winning Rattler Cyder at Tesco stores across Cornwall and Devon.

Healeys, the largest cider maker in Cornwall, will produce the new 330ml version alongside its traditional 500ml bottle as it strives to keep up with demand for its award winning brews.

The partnership with Tesco comes as Healeys looks backs on a 2015, which includes the launch of a £3.5million state of the art production facility as well as deals with other national retailers and a host of industry awards.

Joe Healey, Commercial Director of Healeys Cornish Cyder Farm, said: “2015 was an absolutely fantastic year for us here at Healeys. The whole team have put so much into making it a success, from supporting the launch of the new production facility to helping to increase our production capacity by 50 per cent.

“And it is fantastic to see all that hard work paying off with even more people now able to head to their local Tesco supermarket and see our collection of award winning ciders and fruit juices on the shelves.”

Available in packs of eight, the 6% Rattler original cyder is on sale at around 40 Tesco Extra and superstores across the region with plans for it to be sold country-wide in the future.

Chris Gee, Tesco’s Customer Manager for Beers, Wines and Spirits said: “We work hard to provide shoppers with the best possible range of quality ciders, and are delighted to be able to offer them a little taste of Cornwall

“This new partnership with Healeys is a fantastic example of how by building open and honest partnerships with local suppliers, we can deliver and innovate for customers.”

For the first time in its history, Healeys were able to move to 24 hour production as more than 1,500 tonnes of apples were pressed and transformed in to bottles of cider and handcrafted juices in response to customer demand.

The boost came with the launch of the company’s £3.5million state of the art production facility earlier this year. Dramatically increasing output, the new equipment allows the Healeys team to process up to 6,000 bottles an hour, helping to improve quality and introduce its popular drinks to a wider market.

Joe added: “Rattler has been at the top of the list for cider lovers since it was first created almost 10 years ago so we wanted to offer people more choice.”

The eight packs are also available direct from the Healeys farm and visitor attraction near Truro and via the online shop by logging on to www.healeyscyder.co.uk, where you can find out more about the family-run business and its range of award winning ciders, wines, spirits and preserves.

The company, established in 1986 by Kay and David Healey, has also launched a new cloudy Cornish cider for Marks and Spencer and received accolades for Rattler, Cornish Gold cyder and Cornish Apple Juice at the British Bottlers Institute national awards ceremony.